The Blue John Mine near the village of Castleton in Derbyshire (Postcode S33 8WA for the sat nav) is a great place to take your kids to teach them a bit about caving, rocks, geology and the area of the Peak District in general.  The special thing about Blue John is that it is claimed only to be found in one location on the entire planet!  You guessed it – right there in Castleton in the mine.  Blue John has been used for many years to produce ornamental jewelry and other ornaments such as bowls and vases, and recently it was thought that the mine was running low on the material and that it would be hard to come by in the near future.  However recently, you may have seen in the news that a new vein has been discovered and named as the Ridley Vein, after the chap who found it whilst using a new rock cutting chainsaw.

To get to the Blue John Mines entrance, you need to either travel up Rushup Edge from the Chapel bypass, or if coming from the East – via Edale and from the direction of Sheffield, you will go right through the tiny village of Castleton and make your way up the steep Winnats Pass road.  Turn Right from the top, or left from the end of Rushup, drop down a little and the Blue John Mine can be seen on the right hand side of the road at the bottom of a dip in the hillside.

Here is an image of what you are looking out for. 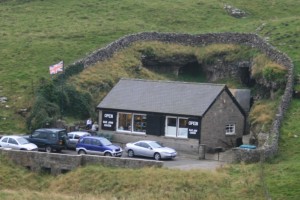 You book in on a tour, they run a few times each day during the season, and then when your tour is ready to run, you will enter the shaft of the mine (a steep set of over 100 steps) and work your way basically into the hillside.

Of all the mines in the area, Blue John is perhaps the most popular due to the rarity of the mineral and the name of the mine.  When inside you will spend around an hour being taught about the mining process, the history of the mineral and its use and also be delighted by the rock formations such as stalagmites and stalactites – as well as those which are perceived as looking similar to a face or animal.

Our tips when visiting would be to wear a very sturdy pair of walking shoes with good grips, as the steps are often damp and slippery.  Additionally take a fleece with you, as the second you enter the mine, the air temperature drops and continues to do so as you go deeper.

The climb back out is quite hard, especially if you are unfit or unwell – so bear this in mind, this does not detract from what a fabulous adventure (especially for kids) a trip down the mine can be.  At the top is a gift shop where you will be able to buy various samples of rocks, including the famous “Blue John” – and also books and other trinkets which make ideal souvenirs of your day out.

Once you have finished the actual mine visit, you can take a trip into the village, get some chips and browse the gift shops along the main road running through Castleton, there is a car park which is just off the roundabout – you can’t miss it. 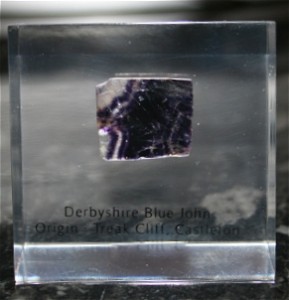 Other caverns to visit in the area – all within a mile or two and accessible by foot from the car park mentioned above, are :-

Treak Cliff Cavern – Good for rock formations.
Peak Cavern – A huge opening / cave entrance – one of the largest in the Northern Hemisphere.
Speedwell Cavern – An underground boat trip – not much to see to be honest.

All of which can be seen in review here.

Here are a few images taken of some of the fascinating rock formations you can see when taking the journey into the hillside via the Blue John Mine tour. 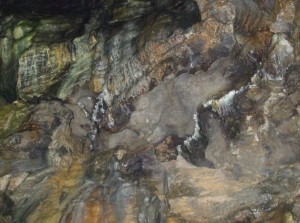 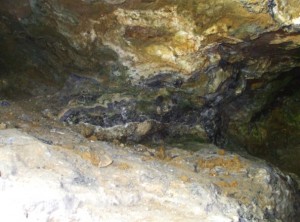 In summary, the mine should be taken as an experience of the area as a whole, our advice would be to visit the area and take the mine visit as part of a whole day out – as you will only be down there an hour or so.  Well worth it – and a hugely popular site. 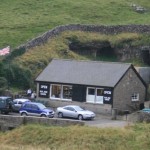